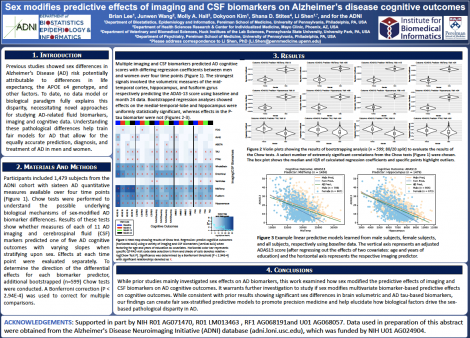 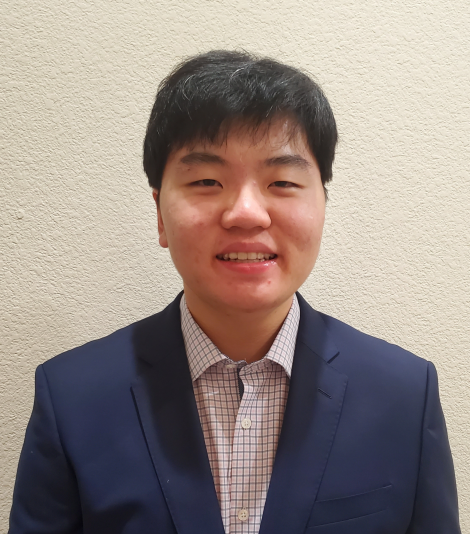 Brian Lee is an undergraduate research assistant in the Shen Lab. His research focuses on the analysis and integration of -omic data (particularly genomic, epigenomic, proteomic, and metabolomic) to elucidate a molecular pathway for Alzheimer’s Disease.

Materials and Methods: Participants included 1,479 subjects from the ADNI cohort with sixteen AD quantitative measures available over four time points (Figure 1). Chow tests were performed to understand the possible underlying biological mechanisms of sex-modified AD biomarker differences. Results of these tests show whether measures of each of 11 AD imaging and cerebrospinal fluid (CSF) markers predicted one of five AD cognitive outcomes with varying slopes when stratifying upon sex. Effects at each time point were evaluated separately. To determine the direction of the differential effects for each biomarker predictor, additional bootstrapped (n=599) Chow tests were conducted. A Bonferroni correction (P<2.94E-4) was used to correct for multiple comparisons.

Super exciting and interesting work! If you are interested in testing some of this with EHR/clinical data feel free to reach out (bolandm@upenn.edu). I’m investigating some sex differences in AD more generally from EHR data and this might be a neat angle to collaborate on!
Posted by Mary Regina Boland on Wed, 04/27/2022 - 12:21pm
Share this Content

To understand health and disease today, we need new thinking and novel science —the kind  we create when multiple disciplines work together from the ground up. That is why this department has put forward a bold vision in population-health science: a single academic home for biostatistics, epidemiology and informatics. LEARN MORE ABOUT US

© 2021 Trustees of the University of Pennsylvania. All rights reserved. | Disclaimer